We live in uncertain times. Many aren’t handling the news of a worldwide health crisis well at all as COVID-19 or the novel Coronavirus sweeps from country to country. There are those — whether consciously or not — whipping things into a frenzy, making the emotional storm even worse. I’ve been through chaos. I’ve seen death and destruction on a scale that would literally turn your stomach and make you shrink with fear. I can tell you from that experience this isn’t a time to panic. In fact, I don’t think there ever is a time to panic.

I was a missionary for the Church of Jesus Christ of Latter-day Saints in October of 1998 when Hurricane Mitch didn’t just strike the country, it parked off the coast for days and battered away. The Category 5 storm left about 10,000 dead, wiped out nearly every bridge, triggered humongous landslides, and pretty much plunged the population of about 5 million into complete chaos.

Having been there for about a month and a half, I had already escaped death about three weeks before when I was rushed to an emergency room with a severe chase of cholera. There’s nothing quite like waking up to nurses and doctors screaming in a language you’re still learning, an IV shoved into your arm, and the staff frantically doing all sorts of other things to save your life, then sitting in your apartment still hooked up to an IV for some time afterward. Let me tell you, it makes you appreciative of being alive and well.

When I first heard a hurricane was headed toward Honduras it was Sunday afternoon. Having grown up in New Mexico, hurricanes were something I saw for 20 seconds on the news, palm trees whipping around as waves crashed onto a beach somewhere in Florida. They didn’t look like much of anything to me. However, Hondurans were concerned and spoke about “Mitch” with a strain in their voice and wide eyes.

My companion, who was from Nicaragua and had hurricane experience, thought little of the storm. He also very pointedly told me he thought everyone was overreacting. The next day when I suggested maybe we should get some more water (we were almost out) and some food, he became angry with me and essentially told me we weren’t going to panic like everyone else by preparing for the storm. After all, we were far from the coast since we were in the capital, Tegucigalpa, so we would barely feel a thing. It was a decision I’m sure he regretted later but never would admit.

Thanks to my relative ignorance about hurricanes, I wrote a letter to my sister on Monday afternoon, telling her a hurricane was coming but that it was no big deal. I obviously ate those words.

Mitch didn’t strike on Monday evening as forecasted, but instead changed course and headed for the Yucatan Peninsula in Mexico. We went about our work as usual on Tuesday and everyone felt pretty lucky to dodge a bullet. 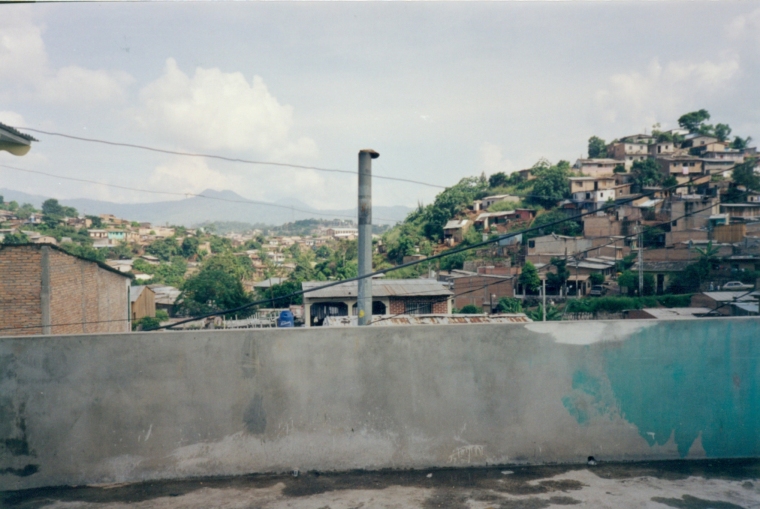 But on Wednesday Mitch struck hard. From that point until the storm broke, it rained literally nonstop. At first it was just like the frequent rainstorms we endured often, so we continued to work as usual, although everyone just wanted to talk about the hurricane. The area was in the shape a bowl and we lived in the bottom on top of a two-story house, surrounded by hillsides. While hiking up one of those hillsides the next morning, a house just a few feet from me started to collapse and slide down the slope. I was lucky I wasn’t a little closer or I would’ve been killed. That’s when we decided to stay home.

We stood on our balcony and watched as one by one houses slid down the mountainsides. The streets on downhill slopes were starting to form steady streams. Those streams soon turned into raging rivers with whitewater rapids, making them impossible to cross and powerful enough to tear down buildings, which they did. Fortunately, the street our house faced wasn’t on a slope, but the streets it intersected at both ends had become raging rivers. We were trapped.

Not until later did I learn it was at about that time an entire neighborhood not too far from us was buried in one huge landslide. The River Choluteca had also overflown, spilling into downtown and making it a lake, adding to the growing chaos.

On Halloween night we were without power, had hardly any water, and only a scant amount of food. The raging flood waters were rising steadily. I lost count of how many houses we saw slide down the mountainsides. We were safe for the moment, but not if the storm continued, and it showed no signs of letting up. In that moment as I wrote in my journal by candlelight I accepted the fact I was going to die at the ripe age of 20. That realization wasn’t mingled with fear, but rather it was a quiet reckoning that the storm wasn’t losing strength, it wasn’t moving away, and my time was up.

Miraculously, Mitch finally lost power and drifted back into the Caribbean Ocean, the rain ceasing after days of a deluge unlike anything I’ve ever seen. Everything was eerily quiet, until we stepped onto the streets to see what could be done in the aftermath. There was so much destruction, more than I had imagined, people digging through mud and debris while crying for a lost loved one, others wandering around looking absolutely lost.

When I awoke the following morning, I could hear all kinds of buzzing in the sky. Stepping out onto our balcony, every kind of aircraft imaginable filled the sky above the city, both civilian and military vessels bearing the flags of many countries. They were bringing supplies, doctors, engineers, etc. to help. Up to that point I honestly wondered if anyone cared what was happening in Honduras. I feared the people were on their own and that thought hurt.

From there we spent months distributing food and medical supplies, digging mud out of houses, rebuilding walls toppled by the storm, helping to repair dirt roads, etc. Even when I left the country in the summer of 2000 the destruction was still apparent, like the lead image on this post of bridge supports but no bridge, a picture I took right before returning to the US.

I’ve seen bad times most people can’t possibly imagine. That’s not something to brag about. I certainly hope my children never experience what I have. While I can’t change what I went through, I can learn from it and try to teach others — that’s the entire point of this post. Life went on after the storm, even after so many were lost.

Nothing is ever made better by panicking. I saw people panic, subsequently make bad decisions, then pay for those with their life. I saw others refuse to listen to good sense, like how we didn’t get water even though we were almost out, and pay for that. For three weeks after the storm I brushed my teeth with orange soda because of that ill-advised decision. I was lucky to have that, instead of nothing to drink, to be honest. Everything could have been so much worse.

Ultimately, there are no guarantees we won’t be caught in some cataclysmic event, try as we may. That really unnerves people, but I can honestly say it doesn’t fill me with panic. Why? Because I trust God will not abandon me. That sounds like a stupid-simple answer to those without faith, but I’ve been through hell and back again and know from experience it’s true. A lack of faith makes anyone who puts their trust in a higher power appear foolish. But trusting in God doesn’t mean you don’t take precautions nor do what you can to be prepared for the worst.

This is not a time for panic, but instead this is an opportunity to increase your faith. So many question if God cares about them. That makes any situation scarier, so use that fear to push you in the direction of belief. In my life I’ve found doing so to be of supreme benefit. Yes, I’m concerned about this new Coronavirus outbreak and what it means for everyone I love, but I have faith we are all in God’s hands, no matter the outcome. We don’t get to choose the challenges we face, but we do choose how we respond. More perilous times are coming, just like they did for me in Honduras after the hurricane. I escaped from death several more times. Use this opportunity to build your house upon the rock. It’s a decision you won’t regret.

Images by Steven Symes. All rights reserved for this blog post text and the accompanying photograph.

Full-time automotive writer, editor, and author. Sometimes I tell stories about the machines which move humanity, and sometimes I tell other stories which do the same.